Starting a portfolio of individual stocks can be a daunting task. With literally thousands of stocks to pick from, where does a new investor begin? Ideally, the first stocks you pick are ones that are easy to understand, have a solid track record of success, and have some tailwinds to power growth for years to come.

We asked three experienced investors to pick one stock to anchor their portfolio if they were just starting out. They chose MercadoLibre (NASDAQ:MELI), PayPal (NASDAQ:PYPL), and The Trade Desk (NASDAQ:TTD).

Brian Withers (MercadoLibre): Founded in 1999 as a platform for person-to-person online sales (similar to eBay), MercadoLibre has grown into much more than that for the Latin American region. Today it’s comprised of six complementary businesses focused on the e-commerce experience. These include an online marketplace, fulfillment services, software for maintaining online shops, payments, credit services, and advertising. These six combine to make MercadoLibre the leading e-commerce and fintech platform in the region.

The coronavirus has been a massive tailwind for the company, propelling its top line to more than triple over the past two years. This has been made possible by the growth in its online marketplace (represented in the table below as items sold) and its incredibly popular payments platform, MercadoPago.

But this company is really just getting started. Today, Latin America has a population of 652 million people, of which 407 million are internet users. The number of online shoppers is even smaller at 249 million. There are only 79 million active buyers on MercadoLibre’s marketplace. The opportunity to grow beyond its current set of customers is tremendous.

Additionally, e-commerce has strong tailwinds in the region as online shopping becomes more popular. In 2020, e-commerce purchases totaled around $193 billion, according to Americas Market Intelligence, and that’s expected to grow to $580 billion by 2024.

Lastly, the stock has been swept up in the tech sell-off in the market and is looking like a bargain at its current valuation. Today its price-to-sales ratio of 8.7 is below where it was five years ago. Some investors may be worried about geopolitical and currency risk in the region. I don’t want to discount those risks, but as a counterargument, I’d point to the more than two decades of success that Founder and CEO Marcos Galperin and his long-standing management team have had in the region.

There’s a lot to like about this priced-at-a-bargain Latin American gem, and it would be my top choice to begin my investing journey. 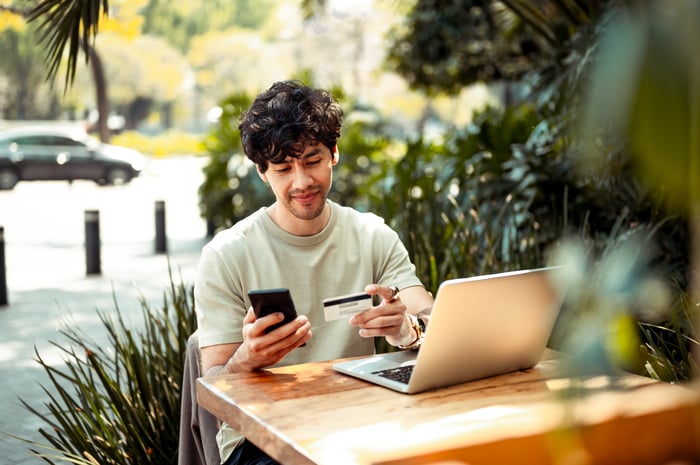 PayPal: Consider cashing in on the fintech boom

Will Healy (PayPal): Despite its early entrance into the fintech market, PayPal continues to compete and innovate. The payments company claims more than 426 million accounts in over 200 countries and processes online transactions for both individuals and businesses.

Moreover, Research & Markets forecasts the fintech industry will grow at a compound annual rate of 27% through 2026, reaching a size of over $31.5 trillion. This means that despite its global presence, it holds tremendous potential to drive further revenue growth.

Also, PayPal has grown far beyond serving as a payments processing ecosystem. Its social payments platform Venmo claims more than 83 million users who use it to send and receive cash and trade cryptocurrencies.

These platforms helped PayPal generate $25.4 billion in revenue in 2021, 17% more than last year. However, lower net gains on strategic investments in 2021 caused net income to fall 1% during the period to $4.2 billion.

Also, PayPal projected only 6% revenue growth in Q1 as supply chain issues and inflation weigh on transaction volumes. Furthermore, the company said it would prioritize boosting revenue from high-value customers over adding new users. Despite forecasts of 15 million to 20 million additional customers this year, PayPal stock plunged by 25% on the following trading day. PayPal stock is now down by over 55% over the last 12 months.

Nonetheless, management believes growth will return later this year. Moreover, PayPal has significantly outperformed the S&P 500 since its spinoff from eBay, rising by about 235% since its 2015 IPO. That growth took its market cap to just over $140 billion, nearly four times larger than its former parent.

Additionally, thanks to the lower stock price, it sells for about 35 times earnings. This is its lowest earnings multiple in five years and well under Block‘s 105 P/E ratio. Given its growth potential and the discounted stock price, new investors could consider PayPal’s 25% crash an opportunity to buy. 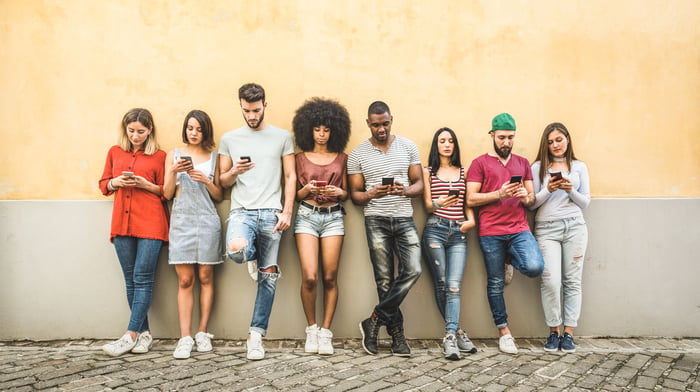 The Trade Desk: On the bleeding edge of advertising technology

Danny Vena (The Trade Desk): Once upon a time, the family gathered around a television set in the evening, watching the best shows they could find on the three or four channels available. In those days, advertising was easy, as marketers connected with a captive audience. Those days are gone and advertisers can no longer depend solely on broadcast or even cable television to reach an increasingly scattered audience. That’s where The Trade Desk comes in.

Programmatic advertising is the leading edge of digital advertising technology, allowing marketers to reach an audience wherever it may be. This is an area The Trade Desk dominates, boasting a state-of-the-art platform that can evaluate 12 million ad impressions and quadrillions of permutations each second, helping marketers find and communicate with their target market. Rather than competing, The Trade Desk works with the world’s leading advertising agencies to navigate the evolving and highly complex world of digital advertising.

The impending death of the third-party cookie has been nerve-racking for investors in the digital advertising space, but The Trade Desk is unconcerned. The company has long anticipated the move away from cookies, spearheading efforts supporting targeted ads while protecting consumer privacy.

To that end, the company recently introduced its Unified ID 2.0. A long and impressive laundry list of companies and advertisers has adopted The Trade Desk’s platform, which delivers relevant ads without the need to collect personal information.

The advertising industry has historically grown at a snail’s pace, but this year, it’s expected to climb by roughly 6.9% to $619 billion. That doesn’t tell the entire story, however, as some segments of the industry are growing much faster.

Digital advertising is growing at nearly twice the rate of the overall market and is expected to jump roughly 14% in 2022. Programmatic advertising, which uses sophisticated algorithms and high-speed computers to ensure ads target the right audience, is the fastest-growing segment of the industry, expected to climb 19% this year. Yet even in the current environment, The Trade Desk is growing even faster.

During the first nine months of 2021, The Trade Desk generated revenue of $801 million, up 55% year over year. This resulted in net income of $129.7 million and adjusted earnings per share of $0.50, up 61% — even as the company invested heavily to release Solimar, its most advanced ad-trading platform ever.

As the world continues to shift away from legacy broadcast and cable viewing, The Trade Desk is leading the paradigm shift in advertising. With a massive addressable market and secular tailwinds driving its adoption, is it any wonder I’d buy The Trade Desk first if I was building a portfolio from scratch?

How to Identify Crypto Chart Patterns